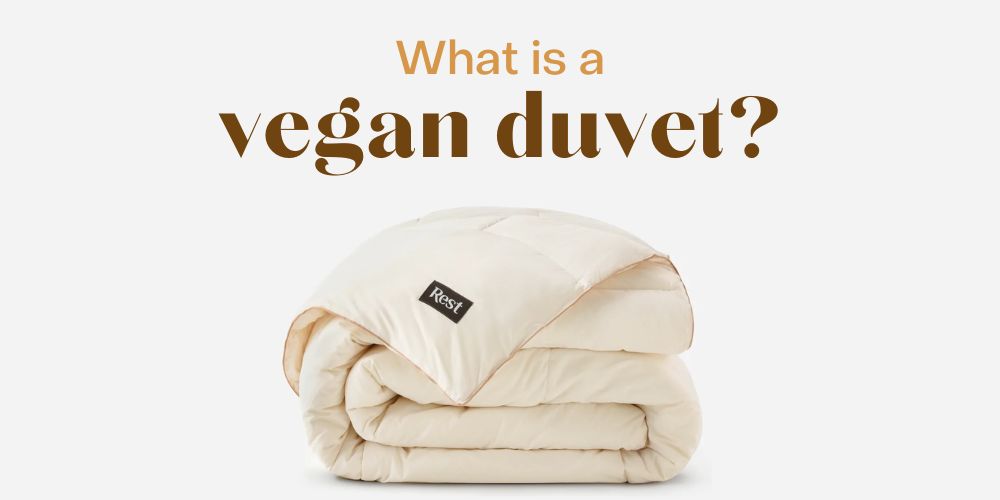 You’re thinking it, I’m just saying it. How in the world can a duvet be “vegan”? Also what is even the point? Rest Duvet has made their newest product – the Vegan Duvet. So the question stands, what is a vegan duvet?

What makes something “vegan-friendly”?

Vegan simply means that no animal by-products are used. For food purposes, we know that means that animal meat or anything that an animal produces like milk or eggs is not allowed. How does this relate to duvets then?

For starters, a lot of duvets are made with “down”. “Down is a filling feather gathered from the undercoat of geese, ducks, and swans. Because of its lightweight nature and lofty fluff, down is a great temperature regulator for people who sleep hot.” (Casper Editorial Team, 2021). In other words, down is an animal-product and not vegan-friendly.

Why get the vegan duvet from Rest?

That being said, Rest Duvet has made their new vegan duvet for those who want to continue living a vegan lifestyle! Or if you are someone like me that just likes supporting environmentally friendly products, this would also be the product for you. If there is a simple way to bring more eco-friendly products into my home, I will.

This duvet is made from corn and has biodegradable fill instead of down. It comes in three options: Light, All-Season, and Ultra-Warm. I chose the All-Season one as it’s the best for my needs living in San Diego. The material feels like peach-fuzz, but is incredibly still moisture-wicking!

Now for the best news of all. Use the code DGB20 to get 20% off of ANYTHING on Rest.

Share about this amazing product and coupon code on:

Read about the amazing cooling comforter, the Evercool, from Rest Duvet on Donna Gail Blog!

2 thoughts on “What Is a Vegan Duvet?”