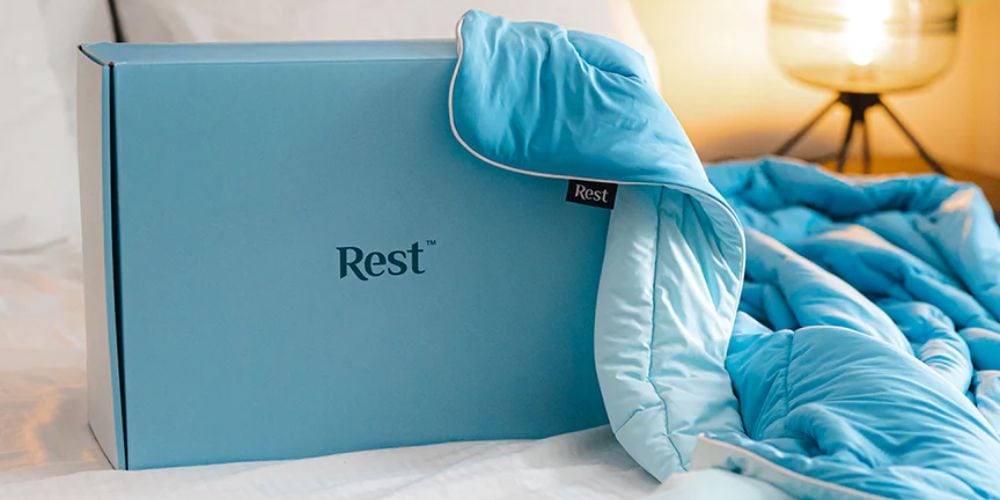 Like Rob Thomas sang in “Smooth” by Santana, man it’s a HOT one! Now that my husband and I own our own condo, we needed an efficient way to cool ourselves at night. And turning the AC way down was not the solution. A cooling comforter was! Specifically the Evercool Cooling Comforter from Rest. But does Evercool really work?

Keep reading for an exclusive discount code for Evercool! I will receive a commission from Rest if the code is used. Using this code does not increase your purchase price.

We recently got the Evercool cooling comforter from Rest. Shockingly enough, it has only been available for three months. Since then, it has already been recommended by Healthline and Goodhousekeeping as one of the best cooling comforters of 2022! Based on those two recommendations alone, I was convinced it could help my husband not be a hot sleeper anymore. Honestly he radiates heat and always wants to cuddle me. I love him to pieces but my goodness I cannot stand how hot he makes our bed feel.

Just upon opening the package, we were both shocked at how cool it actually was. It felt like it had just been taken out of the fridge. It is cooler than cotton, bamboo, silk, and Tencel! Not only that, but it was super soft.

And if you think that was all it was good for, there’s more! It’s also got three times the moisture wicking power compared to regular comforters. Hand in hand with that is that it is quick-drying making caring and washing it a breeze. Needless to say, we were excited to see if it lived up to it’s hype. So.. does Evercool really work for hot sleepers?

Our previous solution for hot nights was to swap out our thick comforter for a thin blanket. Although that was a better solution than keeping the thick comforter, it still didn’t help as much. We immediately put Evercool on our bed and kept all of our sleeping habits exactly the same. Same bamboo sheets, same amount of pillows on the bed, and the AC set to 76 degrees.

Hopping in to bed for the first time, it still felt like the comforter was just cold on its own. Both my husband and I slept great that night. I didn’t feel like the bed was overheating because of him being a hot sleeper. I also felt like I had uninterrupted sleep because I wasn’t waking up from being hot.

After trying it for a week, I don’t think my husband wants to go back to any other blanket. He likes to say that he’s a little “cold burrito” when he’s wrapped up in Evercool. And for me, on some nights I felt like it did TOO good of a job and I had to rely on getting another blanket to warm me back up! But I run pretty cold as it is (my husband hates it when I touch him with my cold feet and hands). As an added bonus, our husky also likes taking his naps on our comforter now too, and that’s not something he normally does.

I would definitely recommend using Evercool to others if you want to sleep less hot, have less night sweat, less waking up due to overheating, or just want to lower your AC bill. And if that bright blue color that Evercool is known for isn’t your bedroom aesthetic, they just released a brand new grey color! In short, yes Evercool really works.

Better yet, if you want a coupon code for Evercool or anything else on Rest.com, use the code DGB20 to get 20% off of the Evercool Cooling Comforter! And if you want more about Rest Duvet reviews, click that link.

Share this blog about the benefits of Evercool on:

2 thoughts on “Does Evercool Really Work For Hot Sleepers?”