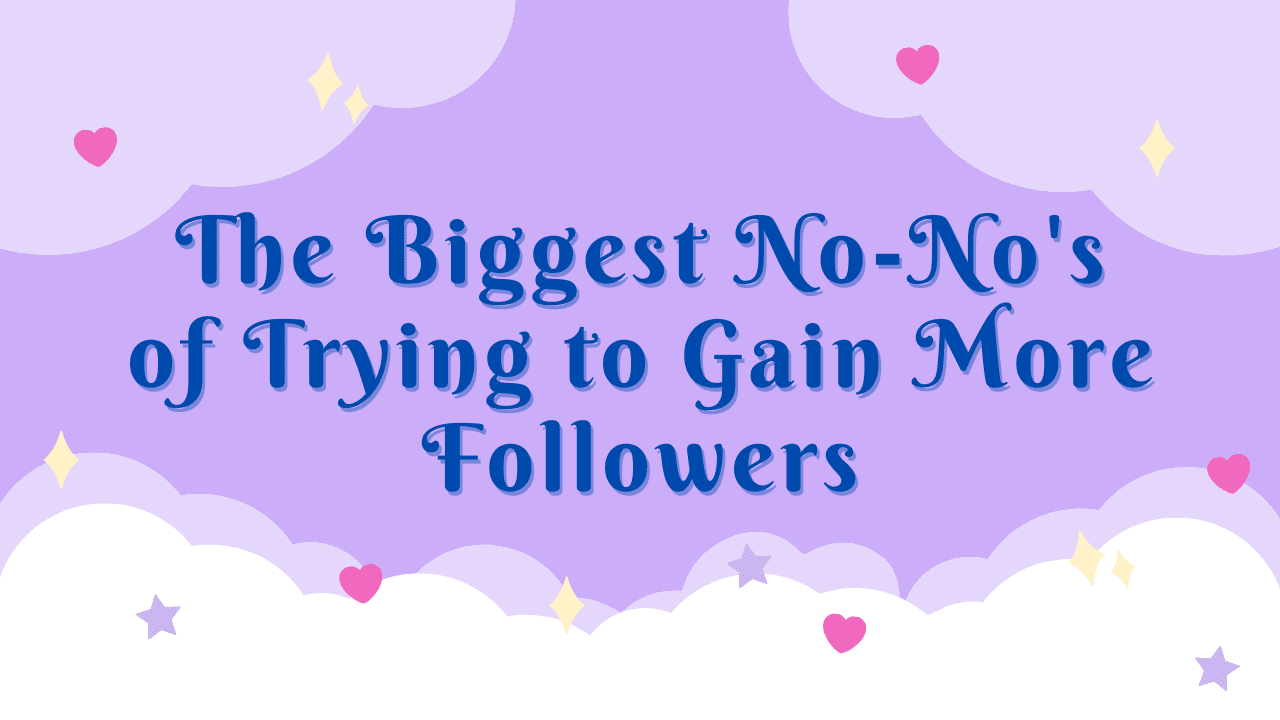 You’re trying to draw more eyes to your page and nothing seems to be working. People just don’t seem to be viewing your content anymore. And the people who do see it don’t seem to be engaging – how frustrating! In moments like these, it can be easy to make the biggest mistakes possible to try to gain followers. You’ve heard inklings about “Instagram pods” and Facebook groups of like-minded Instagrammers who are just trying to get more engagement to their posts too. You even think that joining a Group Board on Pinterest would only help your audience grow! Not to mention, EVERYONE is doing those big loop giveaways and they seem to be gaining a big following from it.

This entire blog is speaking from personal experience. I know the idea of these little games to increase engagement and to gain followers seem harmless and overall beneficial. But I promise you that doing this will have long-term damage to your page.

Here is my experience with each one individually:

I was a part of a pod when this idea first started out a few years ago. Now at the time, the algorithm was a lot different. However the concept was the same – to bring more engagement to your recent post. But here’s why they don’t work. People are not that responsible. I was always one of those people that would like and comment right away to other people’s posts. But there were a few people in our group that would literally post and run. They would never stick around to do the same for the other people in the group.

I explain more of why Pods don’t work in the next section below because the idea of Pods has grown to MASSIVE sizes. The idea has grown far bigger than Instagram can handle in a group DM. And now they must be moderated via a Facebook Group.

When I first joined an engagement group, I thought probably what everyone else thought. That it would be an addition to the engagement that I was already receiving, so it’s obviously a win. But I was very wrong.

If you aren’t familiar with these Engagement Groups, it’s essentially a large Instagram Pod. The one I joined on Facebook had over 5,000 active members, had strict rules for participation, and had many different opportunities per day to join games to increase likes, comments, Story Views, Tik Tok views, etc. I felt confident that I would be able to gain more traction on Instagram because there were so many opportunities. Not to mention, the group rules kept people in check to complete the games. The games were things like “Drop your Instagram URL and ‘like’ every URL in the thread”. Since there were many members, there would be probably 50-300 participants depending on the type of game. But some of them had caps on the amount of participants who could play.

I looked at the active members and thought that even 50 extra likes on my content would be a win! But having all those people flood a direct URL link to my page hurt my organic reach and engagement. My followers weren’t the ones liking my posts and no one was commenting. After a few weeks in the group, I found that I had to play two or even three of these ‘like’ games to get my ‘like’ count back up to what I was getting organically before I was playing the games! I had to make the hard decision to cut the cord, and boy did I pay the price to leave.

My first week of posting without the help of the Engagement Group sucked. Reach was low and it reflected in the likes. I had to work so much harder to get my like count back to where it was prior to playing those group games because now I was trying to get my posts back on to the feeds of my REAL followers.

Group Boards are a way for many Pinterest users to Pin their content on to one Board. Usually when you use Pinterest, you are pinning your content on your boards where only you have access to the ability to pin. And you should keep it that way!

Again, I thought joining a Group Board would just be a way to put more of my content in front of more eyes – especially considering these Group Boards had a few thousand followers! At the time, I was averaging 300,000 monthly viewers (and counting!) so I thought by taking this “next” step would skyrocket my content even further. But I had to learn a hard truth.

Being a part of a Group Board is THE WORST. When you post a Pin on to one of your Boards, and your followers react with it or you get organic growth from it being on a Search or Explore page, that’s progress. Every Pin plays a part in your overall average engagement. Now enter Group Boards. You join. You save a Pin to that Group board. And…… nothing.

What happened? Well what happened was that you posted a Pin on a Board that has HEAVY traffic. You posted a Pin and then a few hours later, it was shuffled to a position farther down on the Board that is past people’s short attention spans of scrolling to get to. So inevitably that post shows a few views and 0 engagement. And you know what else? That affects your overall average! You posted and that Pin failed.

So if you had posted 5 times that day on your own boards and gotten 1,000 views per Pin, that’s awesome! Now say you posted 5 times – 4 times on your own boards and 1 time on a group board, received 1,000 views on those 4 that you posted on your board and only 3 views on that one Pin that you posted on the Group Board. Well now your average views per Pin is around 800 views per Pin instead of 1,000. That’s not bad, right? But Pinterest’s own algorithm reads that as a major decrease in your engagement and will adjust accordingly. Keep this trend up, and you’re only going to lose your monthly viewership.

Not to mention that the people who post on Group Boards are trying to do the same thing you are trying to do – boost their own engagement. Which means that they post and run! The majority of the people looking at Group Boards are not there to find new content to Repin – they are there to post their content in the hopes of someone seeing it and boosting their engagement. Essentially you are posting on a dead Board.

You see them EVERYWHERE! And honestly, many influencers say this is the only way they can gain followers now. I even used to do them! But what I found at the end of the road was a ton of followers, but no better engagement. Why? Because the people I gained in followership were not there for me – they were there for the next free thing.

They never engaged with my posts and they never supported me or what I did. So more often than not it was embarrassing having 30k+ in followers but having a “like” count that did not reflect that. Not to mention, it’s almost insulting to your ACTUAL, supportive followers that the odds are stacked against them for getting this awesome giveaway package! They are there nonstop for you and some person swoops in and takes the grand prize and they’ve been following you for, what, five minutes?

Now I know all these things will continue to entice you with a good time and the prospect of trying to gain followers. And trust me, I know everyone’s experience is different when it comes to each one of these things. This blog is written from my own personal experience! I am hoping that by giving my insight, you can come to a more educated decision of how you want to take your page. So take what I say with a grain of salt just because what works for me (and more importantly, what doesn’t work for me), might not be the same experience you have.

In a sea of beautiful flowers, be the giant chair that everyone wants to take pictures with 🪑🌸🪑
Life’s a beach - might as well dance with the waves 🌊☀️
Star Wars outfit 1 or outfit 2? 🌌
Peter 1, Peter 2, or Peter 3? Who’s your favorite Spidey? 🕷❤️🕸💙
Recommendations needed - Let’s talk budget travel! ☀️
Sisters can give each other Mother’s Day cards, right?