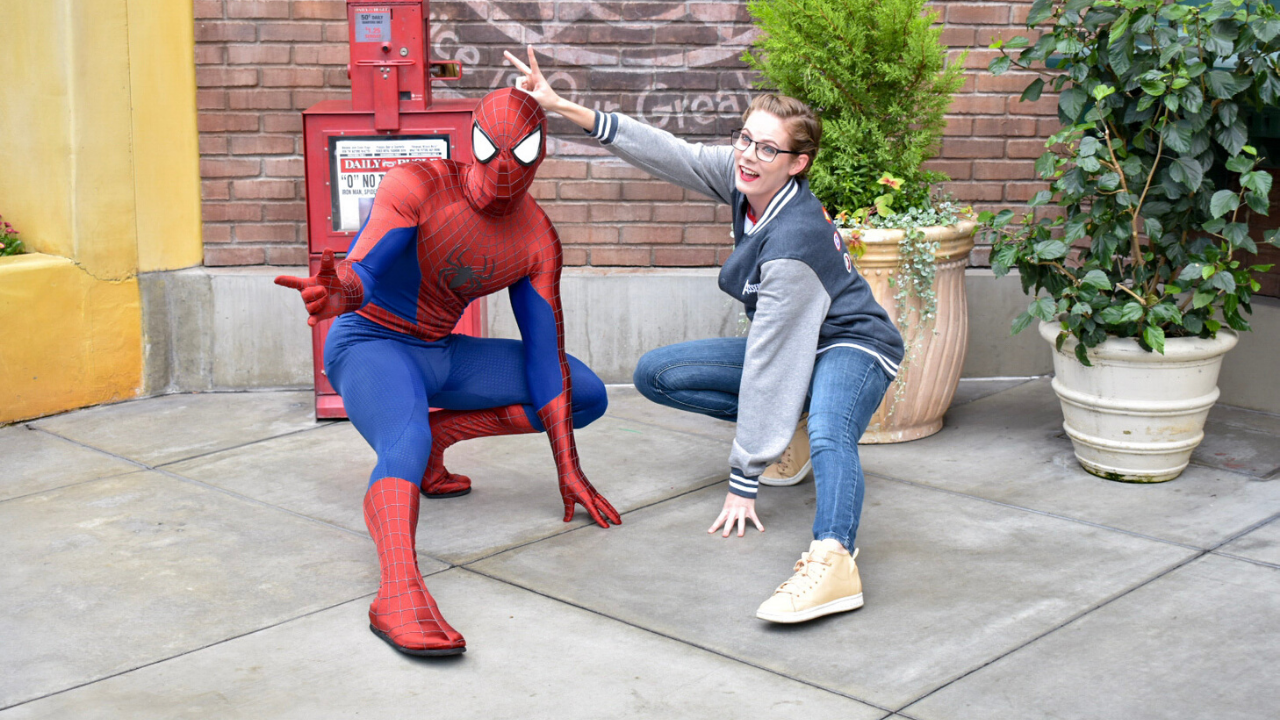 If you read my last blog post on my character experience with pirate lass, Redd, you know that it is my goal for 2019 to work on experiencing more of what Disney has to offer – especially when it involves the character meet and greets!

The Marvel Universe has been carefully and successfully making fans loose their minds since the release of Iron Man in 2008, and with the last major Marvel release of Infinity War in 2018, that has been ten years of my life I have dedicated to the amazing world Stan Lee created and that so many others have helped to perfect.

I have made it SUPER clear that off the record my favorite superhero is Iron Man, but on the record it’s Captain America. {Captain America even told me that his favorite Disney princess is Tony Stark!} And if you are a friend of mine, you know that I thought Spiderman was a little punk for the longest time.. But man, oh man, the new Spiderman chapters have 100% changed my opinion of the youngest superhero – that’s right Tom Holland, I’m looking at you and the ‘amazing’ work you did {and to Tobey Maguire, I hope you take offense}.

As I learned from my last character experience, it is important to have a topic of discussion going into the experience to make sure you get the most out of it. Of course that meant I had to take my new Assemble the Avengers letterman jacket on a field trip to Spiderman’s neighborhood. While I was standing in line, I was watching the other interactions people were having – some people showed him pins, little kids tried to show him their Spidey moves. Me being the dork I am, I wanted to do what the little kids were doing. But also being the grown adult I am, I was going to make sure I was going to do it right!

But first as I walked up to Spiderman, I looked up at a banner above our heads that clearly had some vandalism on it that did not seem so “friendly”.

Spiderman looks up at the banner and says, “Oh no, never. That would just be mean. Whoever did that is just.. rude.”

Ok – I see you, Spidey! I am a huge fan of sarcasm and a good hit. Right there, I knew we were going to have a good time!

I quickly transitioned into showing him my jacket which he loved! He said he doesn’t get a lot of credit for the work he does, and quickly followed up with “But I guess it makes sense. Everyone wants to give the older fellows something to do.” That’s true, he is a more underrated superhero of the Marvel crew.

“So the reason I am here today is because I want you to teach me how to do some Spidey moves.”

“Is that so? Ok so the first thing you do is lean back on your back leg and pretty much sit on your heel. Then you put one of your hands on the ground —“

I quickly noticed that he wasn’t even going to show me how to do this himself! Instead he was literally just standing over me and pointing out what I needed to do!

“Um aren’t you supposed to be doing this with me??”, I asked accusatorially, “I just look stupid doing this by myself!”

UM WHAT?? I couldn’t help it – I busted a gut right there! That is literally exactly the type of burn I would say to one of my friends, so having a character say it to me was absolutely incredible. Putting the mask aside for a second – that employee’s job is to be a sarcastic little prick all day long!! THAT’S AWESOME!

He finally agreed to show me his best pose. But to seal the deal, I threw up some bunny ears behind his head because I wanted to end this experience on a note of childish fun. Walking away from this encounter, I was so happy. This experience alone finally tipped the scale on my feelings towards Spiderman to something that was extremely positive. I walked away knowing that I would be back for another character meet and greet with him as soon as I could.

Not to mention, I need to learn some more moves 😉

If you want to meet Spiderman the next time you are in California Adventure, click here to see where you can! I highly recommend visiting him!

Cody: “Don’t be dramatic.” Me: ... 🌸✨🌷✨🌻✨
Here’s a NEVER BEFORE SEEN Behind the Scenes look into the Empire Strikes Back 😱✨😱✨
Fairytales can come true ✨ You gotta make them happen - it all depends on you 😉💚
If I can be open with you, I feel like I am finally becoming a butterfly 🦋✨🦋✨
Was just trying to take some cute pictures when this happened 🌌✨
What comes first for you - the picture or the caption? 🏝💭 OPEN DISCUSSION 💭