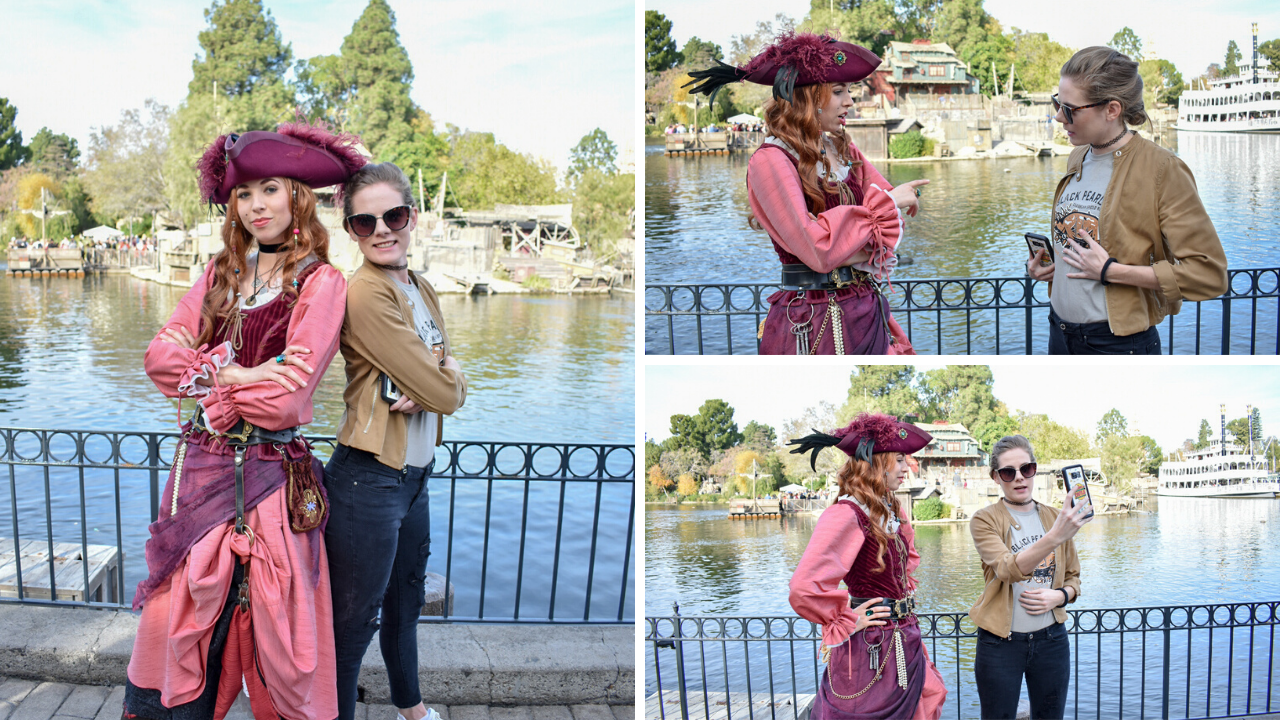 There are two type of Disney goers – those who do character meet and greets, and those that do not. I happen to fall in the “do not” category. Now before one of you avid meet and greet people start coming @ me, hear me out!!

I did not grow up spending my time at Disneyland meeting characters. Disney to me is the rides! And yes I want to experience everything Disney has to offer, but characters were just never a part of it. Now that I am 25 years old, character meet and greets to me are just….. awkward.

Here’s the unfiltered truth: YOU ARE A GROWN PERSON ACTING LIKE SOMEONE ELSE! How am I {another grown up!} supposed to look at you and act like you are ACTUALLY Cinderella?! I know you’re a fake. You know you’re a fake. But yet we both have to act like you were literally pulled out of your cartoon living room and plopped right into the middle of Fantasy Faire. Mmm I don’t buy it.

Now I’m not hating on anyone who loves character talks! This is literally just me and how I perceive my interaction with these characters. This is me looking at someone who is doing their job {and doing it extremely well} and just being curiously questionable about it. What’s even worse is trying to do these meet n greets with a non-face character. What do I mean by that? I mean the people that are put into costumes where they are not allowed to talk. How am I responsible enough to carry this conversation when they cannot talk! So if I were to do a character meet n greet, I would probably gravitate towards a face character.

And boy oh boy did I take that journey…..Enter in the Redhead.

After some exploring on Tom Sawyer’s Island {I’m sorry but I refuse to call it Pirate’s Lair – no matter how cool that name is}, I looked across the lake and who do I see but the most sought after pirate in all the land – Redd! You could tell even from a far that this lass had some sass. With her billowing skirt and her full dusky red ensemble, she looked absolutely stunning! Seeing as it is part of my 2019 resolution to try to do more experiences at Disney, I thought this would be a great first step into the character meet and greet world. There was no line, she didn’t have a cast member delegating her, and come on – it’s Redd! It seemed too perfect to pass up.

All I was thinking walking to her was “ok, so.. just act normal but also try to engage in relevant conversation.” The plus side was that I was wearing my Black Pearl Caribbean Spiced Rum tee so right there I knew I was safe to use my shirt as a conversation starter. But something else came to mind. “We wants the Redhead! We wants the Redhead!”. Well if you had seen Pirates of the Caribbean before they refurbished it, Redd was a stunning bride at the “Buy a Bride” event. Every man wanted her. But what exactly did they want? Needless to say I think we all know WHY they wanted her. But that didn’t sit right with me. “There has got to be a story behind why everyone wants her”, I thought.

There! THAT was my conversation! A backstory! A way to learn something new about a character and actually engage with them a little bit.

Of course, I broke the ice with my shirt {SCORE!}. With that ice breaker, she asked if that meant I had seen Jack Sparrow or the Black Pearl and I replied that it was in the bottle on my shirt. Being the pillaging pirate she is, she asked if she could have it. Well I wasn’t going to just hand it over that easy. So I said she could have it for the right price of course.

The price? Answer one question. Why does everyone want the Redhead? Well if you want to find out, watch what she had to say below. Enjoy 😉

I’m pretty sure you can see where these posts have been going lately.. 😉🌸✨
If you need another fun thing to do in San Diego, let me add to your list again 😉🎥✨
ad | All I wanted was to match my Jeep’s Avenger style 😉🖤❤️ SWIPE to see Cody being the best, most flexible Instagram fiancé through the reflection 🤣
How to get to Comic-Con this year! 💚✨💚 STEP ONE: Have a computer. And that’s it 😂
I’d like to think that you’ll be finding something new to do with this blog 😉🏰💬
One thing I actually do miss about quarantine was all the time I got to spend reading 💜